So another week begins and today I have the pleasure of welcoming Amber Michelle Cook to One Thousand Worlds. She is the author of Defense Mechanisms and lets us take a peek at the first one thousand words.

What if your deja vu was really flashes of a life running parallel to your own?
An imaginative child, Janey left childhood far behind as soon as older children and adults began to tease her for it, much to the disappointment of her younger brother.  On her thirtieth birthday, the first Pulse hits and drives them to seek shelter at his favorite hangout – a one-of-a-kind indoor playland for grown-ups called the Imaginarium.  When the place is attacked by urban looters, she becomes an unwilling 'defender of imagination.'
Raised within the confines of Tanglewood, a workshop-residence formed from the awakening of a grove of silver birch, Ozanne fled her family's unrelenting expectations for a life of frivolity and vanity at Court.  Upon the passing of a Wave that obstructs all but personal Glamour, she races back with her brother to protect it from the Foe, though certain she has little to offer.  Why then does he persist in looking to her to protect them?
Defense Mechanisms is a contemporary fairy tale of finding realistic, modern-day happy endings when the ways we learn to protect ourselves from other people's emotional sore spots, like ignorance and hate, keep us from being who we really are and finding our place in life.

Amber Michelle Cook writes stories of deep, meaningful fun.
Partly raised in Germany, she went to an international school for high-school, majored in linguistics, loves literature and period pieces.  She's also a photography/graphic arts artist of color and wonder living in the great Northwest.
In addition to leading improv writing tables, she's one of the team behind National Novel Editing Month and Member Relations Chair of Communications/Marketing for the Northwest Independent Writers Association.
Aside from words and stories, she adores dogs and is fascinated by any and everything aquatic.  Especially cephalopods. 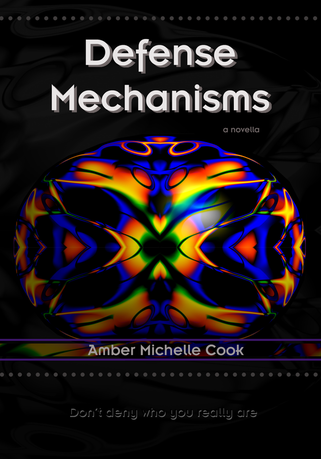 Where to buy Defense Mechanisms

You can connect with Amber here:


Amber Michelle Cook's novella, What the Faeries Left Behind,


is now available on Amazon, BN.com,


Kobo, the Sony.com store and Smashwords.

www.ambermichellecook.com
Posted by Richie Earl at 07:30

Links to other great sites