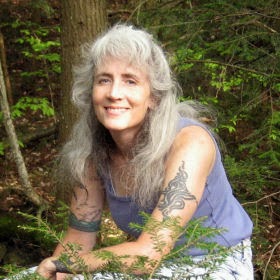 F.T. McKinstry is today's interviewed author on One Thousand Worlds. This follows on to her feature on this blog last week and you can read that post here.


Tell us about your latest book.
Ascarion is the fourth book in the Chronicles of Ealiron. This story begins on a cold backwater isle that harbors some dark secrets. When a woman with royal blood and a rugged disposition crosses an order of warlocks under the king's command, she sets in motion a war that gets the attention of wizards and gods. This is a story of hunters and hunted, spies, thieves, sorcerers and otherworldly beings with private agendas. Beneath this lurks a god with something to hide; if discovered, it will alter the world's timeline and plunge it into desolation.
This book introduces some new characters while also giving protagonists from the other books, including immortals, a big role to play.

How many books have you written?
Four novels in the Chronicles of Ealiron: The Hunter's Rede, The Gray Isles, Crowharrow and Ascarion. The books in this series stand alone as individual stories that happen in the same world, sequentially in time, with some of the same characters appearing throughout. It is character intensive, heavy on swords and sorcery, mythology and pagan themes. I've also published a novella called Water Dark that takes place in Ealiron; and a short story collection called Wizards, Woods and Gods, eight tales with a fairytale flavor that delve into tree and animal lore, magic, cosmos, love, war and mysticism. Some of these stories were originally published in fantasy magazines.

What are you working on at the moment?
A fantasy novel with scifi undertones and Norse mythological themes. It involves warring immortals and the mortals who traffic with them. It will probably start a new series, but we'll see about that.

What are the most important attributes to remaining sane as a writer?
Most days I think one has to be insane to do this. But many things keep me between the worlds: music, cats, fishes, gardens, woods, long winters, reading books and coffee. I also paint. This is a different kind of space that has a way of feeding my writing, and vice versa.

How much impact does your childhood have on your writing?
I spent my childhood reading fantasy and scifi novels, encyclopedias, dictionaries, psychology, mythology and other such things. I found answers in unlikely places and at some point I decided I wanted to write and offer the same thing to others. The first "book" I wrote was a housecleaning exercise for childhood trauma: evil gods, wizards, princesses, monsters—nearly 300,000 words of it. It could have been a psychological case study in dealing with difficult archetypes. I wanted to publish it, but that never happened and many years later I realized that wasn't the point. It got my head together, taught me things and built foundations. It was the beginning of my writing career.

What was the greatest thing you learned at school?
I often think I learned more from my books (this was before the internet) than I did in school, but the few things that did interest me there were telltale and gave me a sense of personal identity. Later, when school became all about making a living, I took a stark detour into high tech and discovered that I'm kind of a geek. I wasn't looking for credentials or a future, I just wanted to survive so I could do what I wanted with my life. But I took to computers and software like a fish to water and this came in handy when I forged my way into publishing. It gave me an incredibly versatile structure for expressing myself.

Do you have a favourite character among the ones you've invented?
Lorth of Ostarin. He is a complex character and a driving force throughout the Chronicles of Ealiron. He is a well-paid assassin with the rough skills of a wizard and an uncanny sensitivity to the Otherworld. A bit tormented and utterly lawless, he is ambivalent in his loyalties to humans, but he likes animals, finding them to be true guides and companions in his dark business. He is a paradox, and as he develops throughout the series, he becomes a force to be reckoned with.

If you could meet any of your own characters, who would it be?
While Lorth is my favorite character, I'm not sure I would want to meet him because I would be a babbling idiot. What do you say to a man like that? So I'll go with Hemlock, the protagonist of The Gray Isles. He is a seer with a mysterious past and a link to the sea that ends up being his undoing—or so it seems, until it changes him into something...else. He is all about the struggle to know oneself and I have some questions.

What do you want to be when you grow up?
A shaman.

If you could trade places with any other person for a week, famous or not famous, living or dead, real or fictional, with whom would it be?
That would be a toss-up between Jimi Hendrix and Gandalf.


Applying the word "ethic" to the way I work is pretty dicey. How about "Ramble On" by Led Zeppelin.

Links to other great sites